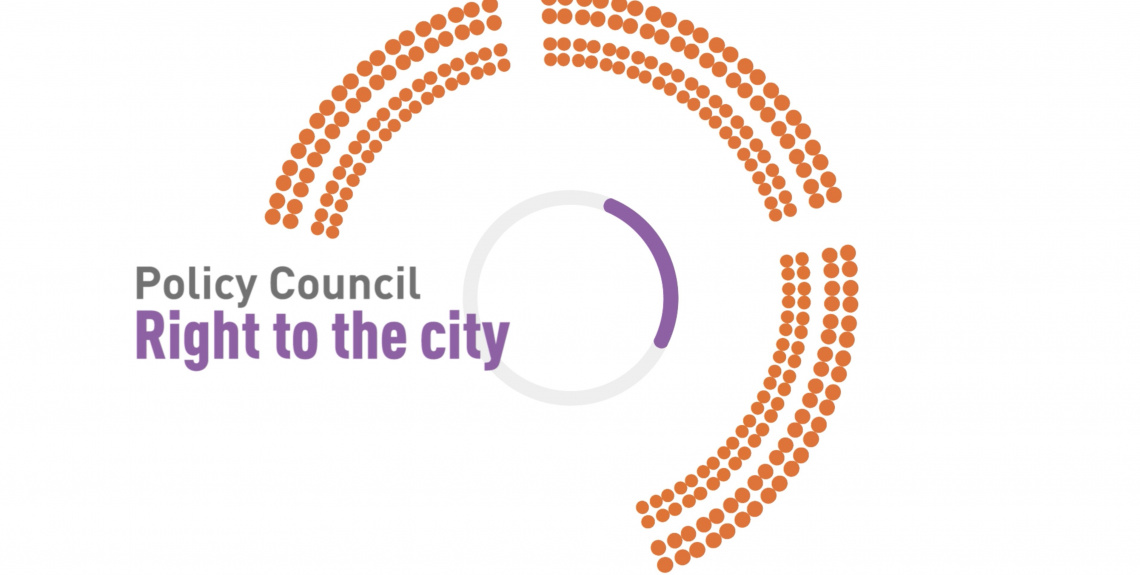 Setting the UCLG agenda for advocacy and political debate on the Right to the City and Human Rights: The first Policy Council of 2021 leads the way to a new Pact for the Future

The Policy Council on the Right to the City and Inclusive Territories met last 9 February, gathering most of its renovated local government membership and co-presidency for the first time this 2021. The contributions by co-chairs and councillors - among which, several leading members of the UCLG-CSIPDHR - allowed to kick off the UCLG policy discussion on how to renew the world organization social agendas in the coming period, welcoming to this end meaningful contributions and policy innovations by leading members. This Policy Council will be an instrumental mechanism to trigger members' discussions around the place of the “new generation of human rights” in UCLG’s Pact for the Future and People.

The Policy Council welcomed the opening statements of Grigny and Ouagadougou, who recently assumed the Council co-chairmanship alongside Bogotá. Represented by mayors Philippe Rio and Armand Béouindé respectively, both cities called to open a wide discussion among members that allows to renew the social agenda of the World Organisation in the coming period. The aim in this process is to co-create a renewed “Pact for the People” that is able to lead the way to an inclusive recovery after the COVID-19 crisis. Exploring human rights approaches and combating inequality at its core were stressed as key structuring messages for this process, that should allow to both address the needs of the most vulnerable and to reinforce public service delivery and access to basic services for all.

Several interventions throughout the session allowed members in the World Organization to identify emerging priority areas and networking initiatives seeking to better structure members’ contribution to the Pact for the Future and People. The role of human rights-based approaches and new generation rights such as digital rights or cultural rights was highlighted by leading members in the Committee and beyond - such as co-presidents Philippe Rio (Grigny) and Linda Voortman (Utrecht), Deputy Mayor Laia Bonet (Barcelona) or Deputy Mayor Catarina Vaz Pinto (Lisbon). They referred to the “rights agenda as the right agenda” to address inequalities and promote social justice from a transformative perspective.

In the same vein, other councillors stressed the connection between the inequality crisis exacerbated by the pandemic and the need to care for those residents and communities more exposed to vulnerability. This is the case of Mayor Pedro del Cura (Rivas Vaciamadrid), Mayor Zinnur Büyükgöz (Gebze), Mayor Àstrid Desset (Anglès / Federation of Catalan Municipalities) and Mayor Carola Gunarsson (Sala / SALAR). These speakers also referred to the gender equality agenda, covering key issues, from women leadership to addressing violence against women and girls. A fundamental focus was also devoted to the issue of welcoming cities towards migration and its connection to peace, as conceived by Mayor Salvatore Martello (Lampedusa) and Deputy Mayor Med Wajdi Aydi (Sfax).

Key partners for the World Organization on the agenda of human rights and right to the city - from the Office of the High Commissioner for Human Rights (OHCHR) to the General Assembly of Partners on Accessibility - showcased how this agenda strongly relied also on partnership and co-creation with global stakeholders and local communities alike.

Follow-up proposals by the Committee

Several councillors representing the UCLG-CSIPDHR proposed two specific pathways allowing to develop this agenda further in the context of the Committee and beyond. The first one referred to contributing to strengthen global human rights cities campaigning and political discussions in the coming period. All UCLG members were therefore invited to join “champion” human rights cities willing to better address the potential of the human rights based approach to recover better after the COVID-19 crisis, while finding ways to expand the impact of the human rights cities movement across the world. The second pathway referred to the update process of the Global Charter-Agenda for Human Rights in the City on the 10th anniversary of its adoption by the UCLG World Council. The Charter process would also connect to the work of regional sections and other consultation mechanisms on this topic, as well as to similar initiatives such as the Rome Charter for Cultural Rights (2020) or the proposed Lampedusa Charter on Migration and Peace.