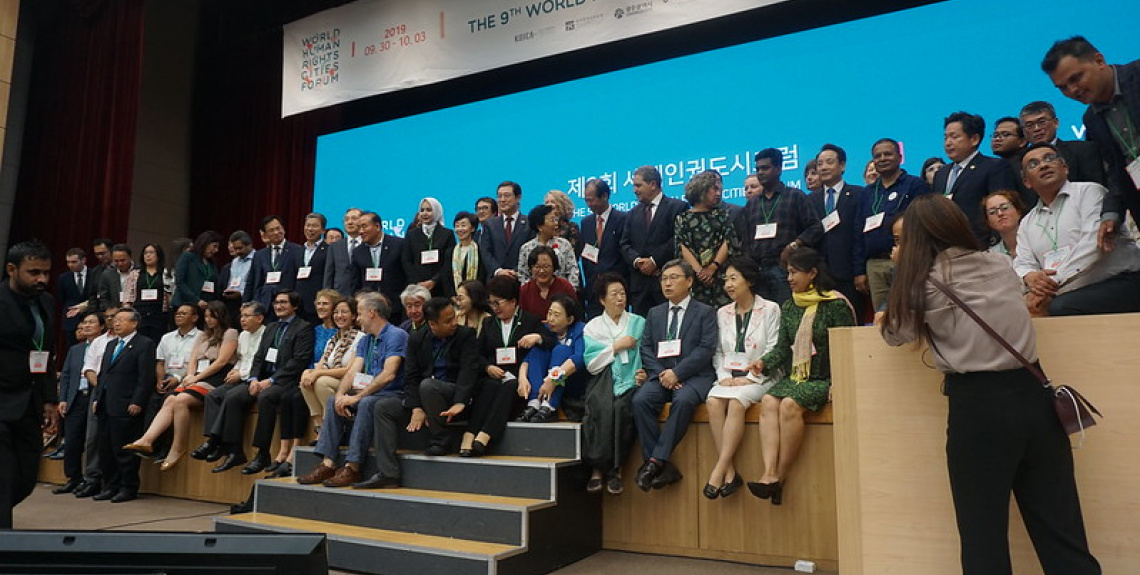 The World Human Rights Cities Forum (WHRCF) is held annually in the South Korean city of Gwangju. After holding more than 10 consecutive editions, it has consolidated as a fundamental meeting point for the global movement of human rights cities. It is organized on a yearly basis by the Gwangju International Centre, the UCLG-CSIPDHR and the Raoul Wallenberg Institute for Human Rights. It is co-hosted also by key international organizations such as the Office of the High Commissioner for Human Rights (OHCHR) and the UNESCO, with a view to strengthen the links between local, regional and global experiences.

The Forum takes place after the initiative of the Metropolitan Government of Gwangju: A co-chair local government of our Committee which is globally recognized for its commitment towards the global promotion of human rights and democracy. Indeed, the WHRCF aims at upholding the values of the May 18 Gwangju Uprising (1980): A key event in South Korea’s modern history which played a major role in the democratization of the country. This and other past events in favor of freedom and human dignity contributed to the consolidation of what is now identified as the Gwangju Spirit.

The Forum places special attention to key thematic areas for the local implementation of human rights, such as the right to peace, the consolidation of local democracy, sustainable development or fostering municipal cooperation. Through the holding of annual thematic sessions, it equally provides an in-depth analysis of the following ten policy areas: State Violence and Human Rights - Elderly - Child and Youth Education - Gender - Disability - Social Economy and Community Vitalization - Migrants and refugees - Environment and sustainability - Local or village democracy.

[ Know more about the WHRCF ]

The WHRCF Forum offers a meaningful opportunity for reinforcing global networking on human rights between local governments, civil society and international organizations on a yearly basis. It is also seen as a reference for human rights defenders in the Asian region, as it promotes the values of the Asia Human Rights Charter (adopted in Gwangju in 1998).