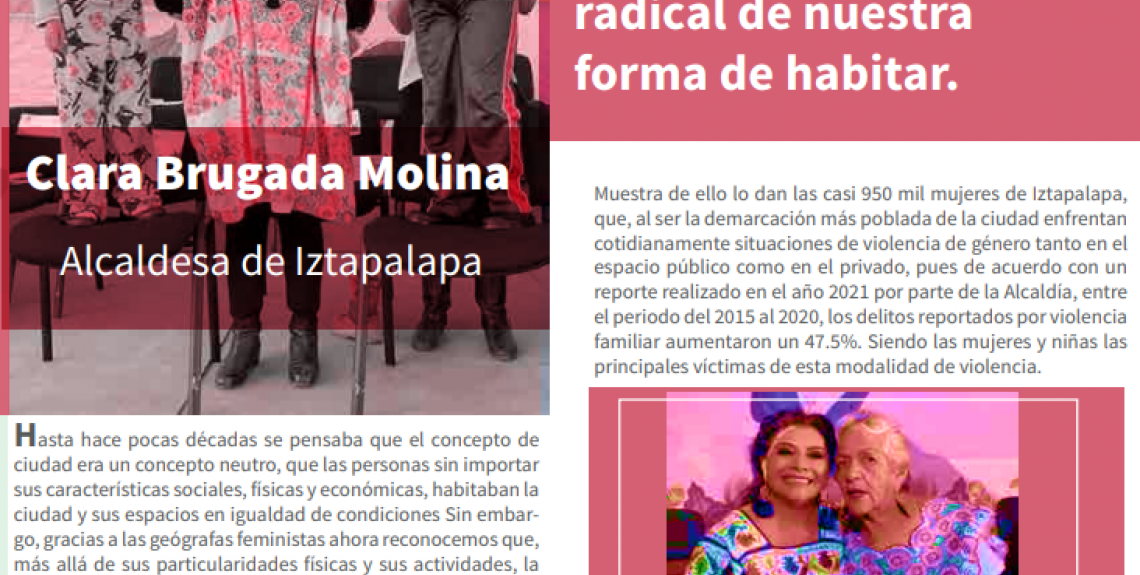 Women’s right to the Feminist City: for a radical transformation of our way of living

Until few decades ago, the “city” was thought as a neutral space and that people inhabited it on equal terms, regardless of their social, physical and economic situation. Thanks to feminist geographers, we now acknowledge that the city goes way beyond its features and functions and entangles different experiences for each of us. Women and men, for example, experience the city differently.

Ana Falú, a feminist architect, affirmed in 2017 that cities reproduce inequalities, especially gender inequalities. Historically, cities were planned and built from men’s perspective, neglecting women’s need. The lack of street lighting to allow women can to walk more safely, or the absence of ramps for children’s prams are only two examples of this.

The city is thus neither neutral nor egalitarian. Even among women, those who live in the periphery face greater problems than those living in the center. These problems include issues related to the lack of sufficient, safe and efficient public transport, which often has an impact on access to employment.
The 950,000 women in Iztapalapa, as the most populated district of Mexico City, face daily situations of gender violence in both public and private spaces. According to a report published by the Mayor’s Office in 2021, the cases of domestic violence increased by 47.5% between 2015 and 2020, and women and girls are the main victims.

Regarding public spaces and public transport, the women of Iztapalapa who travel long distances to carry out their daily activities are subject to harassment, especially young women. In Iztapalapa, 77.4% of women who use public transport are afraid, being women between 15 and 29 years who experience the higher number of assaults.

In addition to this, overcrowding, insecurity, low schooling and job insecurity contribute to jeopardize the right to city of the women of Iztapalapa. Henry Lefevre affirms that cities tend to prioritize the commodification of goods and services over people’s needs, well-being and care. This is why we asked ourselves: what do women need to inhabit the city? Which should be the characteristics of a feminist city?

A feminist city must be committed to the rehabilitation of public spaces, building a safe environment for women in which they can move freely and fearless. In Iztapalapa, we have revitalized 145 different pathways that we called “Free and Safe Women’s Paths” with permanent lighting, murals with a gender focus and other facilities to guarantee women’s right to use and enjoy the city and its spaces. Through this, we would like to shift from a “citizenship of fear" - recalling the definition of Susan Rotker - to a “citizenships of care”, to give women the opportunity to experience a free, safe and shared city.

Feminist Cities must also value, recognize and redistribute care work by seeing it as a public and social responsibility. This implies deconstructing the idea that care and reproduction only correspond to women, and without any economic and symbolic recognition. This is why the Mayor’s Office of Iztapalapa implemented the social programme "Public Care System" , which provides economic support to caregivers dedicating  time and efforts to people in a situations of need (children, the elderly or people with disabilities) and who have limited access to resources, targeting more than 5000 women up to now.

A Feminist City must also be a place free of violence, both in the public and private spheres: this is why we implemented the Siemprevivas Programme, an inter-institutional initiative to address gender violence in the private sphere. The programme evisages to undertake a reflection with the members of Iztapalapa’s families on the way they live together; and to think jointly about possible solutions to improve family relationships. So far, we have carried out processes with 16,806 families.
This programme also includes facilities and spaces to guarantee women’s rights and their comprehensive care: through the Casas de las Siemprevivas, women can access health, education, culture, sport and employment. In 2021, more than 43,000 women were assisted.

To ensure that Iztapalapa is a deminist district that guarantees women’s freedom of movement, we developed the strategy called "Route Free of Violence against Women", which aims at preventing sexual violence in public transport, raising awareness among drivers and passengers about harassment. So far, the strategy targets 14 different journeys in Iztapalpa, has involved 742 transport units and 12,600 users.

In addition, a Feminist City has to guarantee the right to education for women, especially for those who were unable to complete their education due to lack of economic resources or to take care of other people. This is why we launched the "Women Studying" programme, which has provided scholarships to more than 6,500 women, favoring access to better employment and development opportunities.

It is important to rewrite the history of cities, acknowledging that our public spaces, streets, homes and transport are places where our daily lives take place, and that they must be designed to be safe spaces which take into account the needs of women.

Rewriting the history of the city implies giving women a voice in their planning; to address the inequalities and oppressions that prevent their empowerment and the fulfillment of all their rights. It also means to build spaces for the full development of women, writing a new way of inhabiting our cities, where power relations are replaced by the care of others and the care of life. This means enhancing a feminist city where women stop being invisible to become their real protagonists.