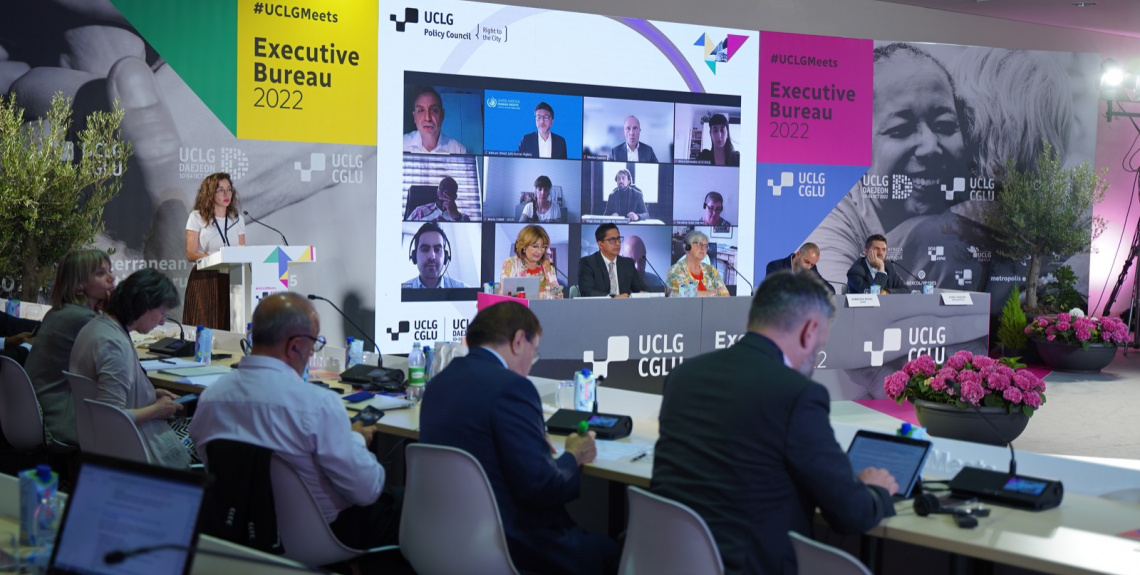 Special session on the UCLG-CSIPDHR Global Campaign “10, 100, 1000 Human Rights Cities and Territories by 2030” at the UCLG Executive Bureau in Sevilla

In the occasion of the  UCLG Executive Bureau (13-15 June 2022), the UCLG-CSIPDHR organized a special session on the Global Campaign launched last February by the Co-presidency of the Committee: “10, 100, 1000 Human Rights Cities and Territories”.

The session brought together more than a dozen of LRGs and partners willing to act on human rights locally and internationally by strengthening and expanding the international movement of “Human Rights Cities and Territories” through the Campaign.

Find more about the Campaign here

The session was introduced by Emilia Saiz, the Secretary General of UCLG, who recalled the importance to pursue an international discussion on Human Rights between LRGs and international organizations like the UN High Commissioner on Human Rights (OHCHR) towards a “new generation of rights”. Amanda Flety-Martinez, Coordinator of our Committee, moderated the session and invited all “cities that want to make a difference” to join the Global Campaign.

Among the speakers, Philippe Rio, Mayor of Grigny  and Co-president of the Committee, reminded that the international municipalist movement is now strongly developed and recognised within the multilateral system, calling on all LRGs to reinforce their joint actions and networks. He stated that “it is our duty to go towards human rights, through education, freedom, health, access to water and to energy. The launch of this campaign today is a historical moment, and I want to contribute to this success”.

Linda Voortman, Co-Mayor of Utrecht and Co-president of the Committee asserted that “we need each other in becoming human rights cities. This is why the “10, 100, 1000 Human Rights Cities and Territories by 2030” is so timely and relevant. To be able to fight discrimination and inequalities we have to see that we are a movement, and that we will grow in synergy”.

Carola Gunnarsson, Mayor of Sala and President of SALAR affirmed that “it is time for us, local governments, to have a serious discussion about our political commitment on Human Rights at the local level and the achievement of the 2030 Sustainable Development Agenda”.

The session was also attended by Jorge Sharp, Mayor of Valparaiso, who brought forward his political vision on the articulation of human rights locally through participatory democracy, social inclusion and by fostering new more sustainable developmental models out of the neoliberal frame. He also underscored how the drafting process of the new Constitution of Chile could give more power to local governments for the them to fulfill right to the city, enhance participation, and to ensure the right of decent and adequate housing.

Gissela Chala, Vice-Mayor of Quito affirmed “UCLG has a great opportunity to make Human Rights’ narrative a reality”. She insisted on the need to include Human Rights in every local and global agenda; as well as the importance to acknowledge the diversity of each territory and their Human Rights actions in order to achieve “territories free from racism or aporophobia, ending violence and giving the opportunity to advance social justice”.

Etornam James Flolu, District Chief Executive of Afadzato South District, stated that “human rights are tied to the development of local economies” and invited all LRGs to join the movement to ensure dignity for all. The Deputy-Mayor of Grenoble, Emmanuel Carroz, also took the floor to underline the historic achievements of his city regarding human rights, and its current efforts to link Human rights with environmental rights to protect both People and Planet.

BE PART OF THE FIRST 100 CITIES AND TERRITORIES WHICH WANT TO MAKE THE DIFFERENCE AND JOIN THE GLOBAL CAMPAIGN!