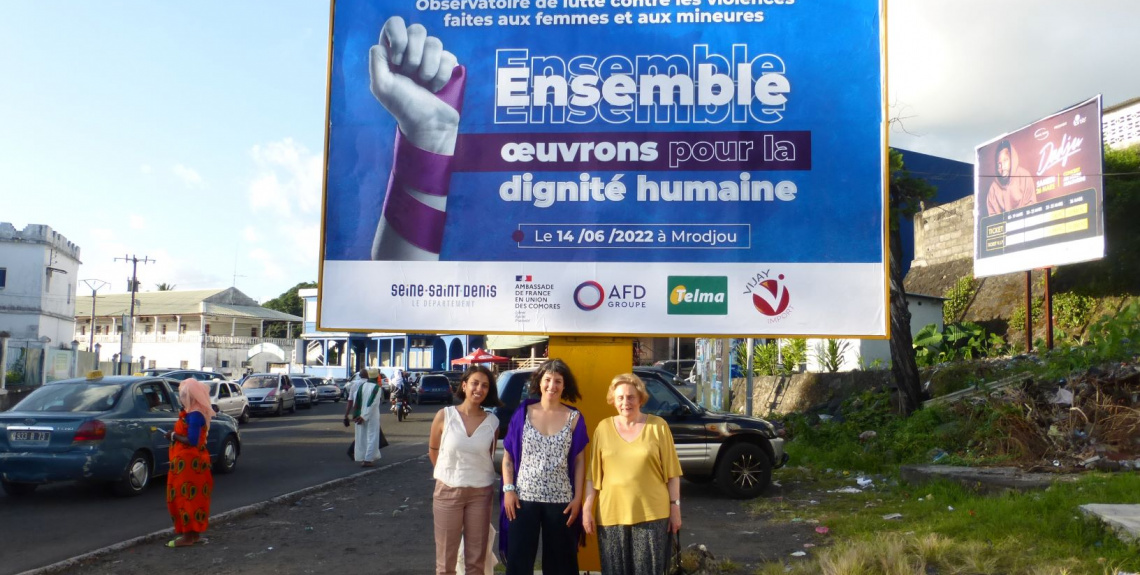 Mission of the International Observatory on Violence against Women to Ngazidja

A delegation from the Department of Seine-Saint-Denis went to Ngazidja, Comoros Islands, from June 12 to 18 as part of the international program "Territories caring for women victims of violence". The delegation was composed of Ernestine Ronai, director of the Observatory of Violence against Women (OVF), Amélie Videau, OVF international projects coordinator, and Jean-Baptiste Dulos, from the International-Europe Department.

The delegation was accompanied by Myriam Abdallah, head of the Observatory for the fight against violence against women and minors in Ngazidja, and Inès Zaky, from the civic service.
The delegation met several times with the partners members of the Steering Committee of the Ngazidja Observatory on Violence against Women: politicians and officials of several municipalities, the Association of Mayors of Ngazidja, the services of the governorate of Ngazidja; as well as with professionals of institutions and associations supporting women victims of violence such as Hifadhu, Moina Tsiwandzima and Toimaya Ya Maoudou.

The Delegation also met with professionals from the police and the judiciary system; the Gendarmerie, the Miners' Brigade and the services of the Public Prosecutor's Office; with health personnel from the ASCOBEF clinic and the COSEP civil security service; as well as with representatives of international organizations (UNICEF and the Red Cross).

These meetings were an opportunity to recall the role of the Observatory; the different steps of the international program, as well as the importance of each partner's contribution. In this sense, an assessment on gender-based violence in Ngazidja carried out jointly by these different partners (a "shared/multistakeholder assessment") presented in November 2022, which will allow the implementation of a local action plan, in order to monitor the evolution of the care and protection of women victims of violence in Ngazidja.

The three training sessions: one session for elected officials and agents of the municipalities of Ngazidja - with the participation of the Association of Mayors of Ngazidja - a second one with members of the Steering Committee of the Observatory of Ngazidja and a third one for health professionals. The participants also created an "inventory" of needs to improve the protection of victims that will lay the groundwork for the future local action plan; and facilitated a workshop on the methodology of shared assessment.

The Department's delegation also conducted several field visits. A visit was made to the premises of the Listening Service in the presence of Unicef, its main donor. The "Listening service", which has been in existence since 2004, assists children and women victims of violence by offering them medical, legal and social support and also carries out awareness-raising activities to combat gender-based violence.

The delegation also visited the premises of the ASCOBEF clinic, a key player in the reception of women victims of violence and a partner of the Listening Service. The latter made better understand the means deployed in medical support for victims, raising in particular the question of "therapeutic abortions". Indeed, although medical personnel rarely resort to therapeutic abortion (which is generally justified only in case of deseases) for victims of sexual violence, it is authorized by Comorian legislation.

The delegation also visited the Comorian royal services, namely the National Gendarmerie and the Palace of Justice. The delegation learned about the progress made in the reception of children victims of violence, a few weeks after the inauguration of the first "Mélanie room” dedicated to this purpose in the Comoros. Also, the Department of Seine Saint Denis had the opportunity to exchanges on data and assessement on violence with the Public Prosecutor's Office.

The Department also had the opportunity to attend the inauguration of the local Observatory for the fight against violence against women and minors of Ngazidja, an event of national importance, as it brought together political Representatives, the police, the mayors of the municipalities of the island, representatives of the religious body, civil society, international organizations, the foreign diplomatic corps and all the partners of the program. Thanks to the live broadcast of the ceremony on the only national television channel, the launching of the Observatory could reach a wide audience.

Finally, this mission was also an opportunity for the Seine Saint Denis Department to meet with several international actors present in Ngazidja, such as the French Embassy, the representative of the European Union and the local teams of the French Development Agency.