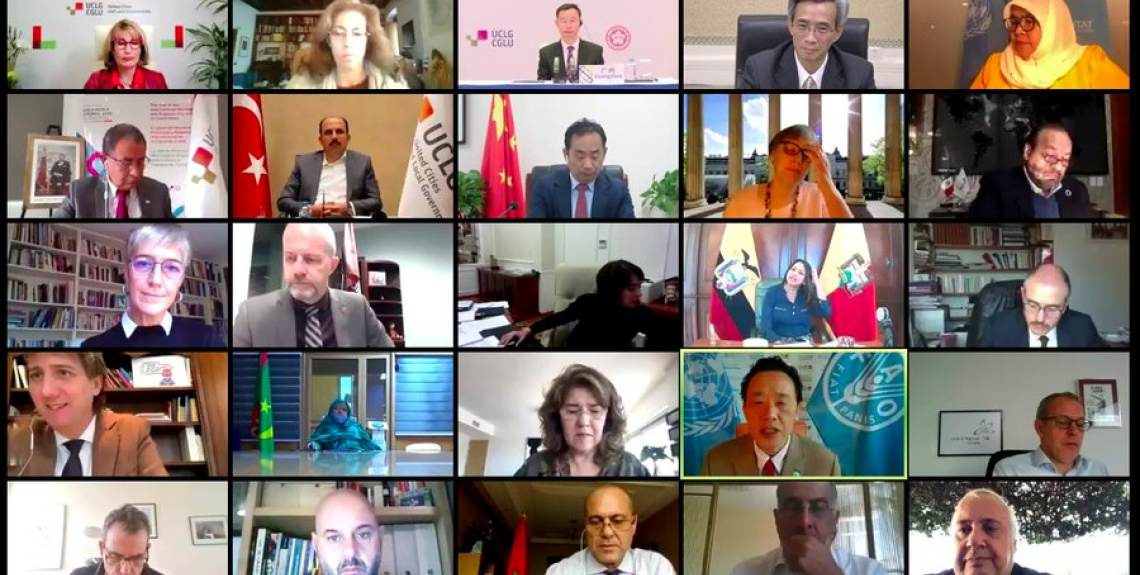 Various representatives of the UCLG-CSIPDHR co-presidency took part in several statutory events of the UCLG World Council held on 9-13 November in an integrated setting in Guangzhou and online. These events kicked off the conversation among UCLG members on what should be the policy priorities for the World Organization in the 2022 - 2028 period, especially oriented towards developing a daring local government framework to lead the way to COVID-19 recovery. Various cities called to articulate this process with the work done within the CSIPDHR, focused in renewing local governments’ social and equality agendas based on the rights-based approach and the right to the city.

Representing the CSIPDHR co-presidency, Utrecht’s Alderman Linda Voortman called to recognize human rights as a decisive vision for UCLG’s new Pact for the Future. Voortman argued how human rights offer both a substantial framework to push for concrete transformations and local innovation on areas like gender equality and LGBTI rights, renewing the local social contract, pushing for a fair digital transformation, advancing the social inclusion of migrants or ensuring access to adequate housing. She invited all interested local governments and partners to join UCLG-CSIPDHR members in building a collective voice on this issue with a view to influence the Pact, taking advantage of the follow-up process to the Global Charter-Agenda for Human Rights in the City on the 10th anniversary of its adoption next 2021, as well as the dialogue initiated with the OHCHR.

Gringy’s Mayor Philippe Rio also joined a special session on urban equality, where he stressed the need to reinforce local government solidarity in face of the unprecedented social crisis many urban territories are currently facing due to COVID-19. Rio shared various aspects of the realities faced by local governments in French working-class territories that are particularly marked by poverty and social vulnerability. He invited local governments to play a strengthened role as a platform seeking to influence the national debate in defense of their fellow residents’ interest. He also invited UCLG members to join the UCLG-CSIPDHR in renewing local equality and social agendas; an endeavour that will be concretized in the drafting process of the GOLD VI Report. Mayor Rio will be co-presiding the UCLG Policy Council on the Right to the City.

Many members shared similar points of view regarding the role innovative approaches to inclusion and equality should play in the strategy of the World Organization. This is the case of Lampedusa’s Mayor Totò Martello, who stressed the need to uphold human rights’ value universality when it comes to the social inclusion of migrants; Rome’s Deputy Mayor Luca Bergamo, who referred to the potential of cultural rights in reinventing social cohesion and conviviality values after the COVID-19 crisis; Barcelona’s Deputy Mayor Laia Bonet, who shared the need to continue developing the ecological transition and digital transformation agenda in connection to human rights values; or the Prefect of Pichincha Paola Pabón and the Mayor of Sala Carola Gunnarson, who launched a similar call in connection to women rights.

The follow-up process to the Global Charter-Agenda for Human Rights in the City, the UCLG Policy Council on the Right to the City and the process to develop the GOLD VI Report on Urban Equality are therefore seen as concrete avenues by which UCLG-CSIPDHR members will be advancing this collective reflection and policy priorities in the coming year. Reach the UCLG-CSIPDHR Executive Secretariat in case you want to know more.