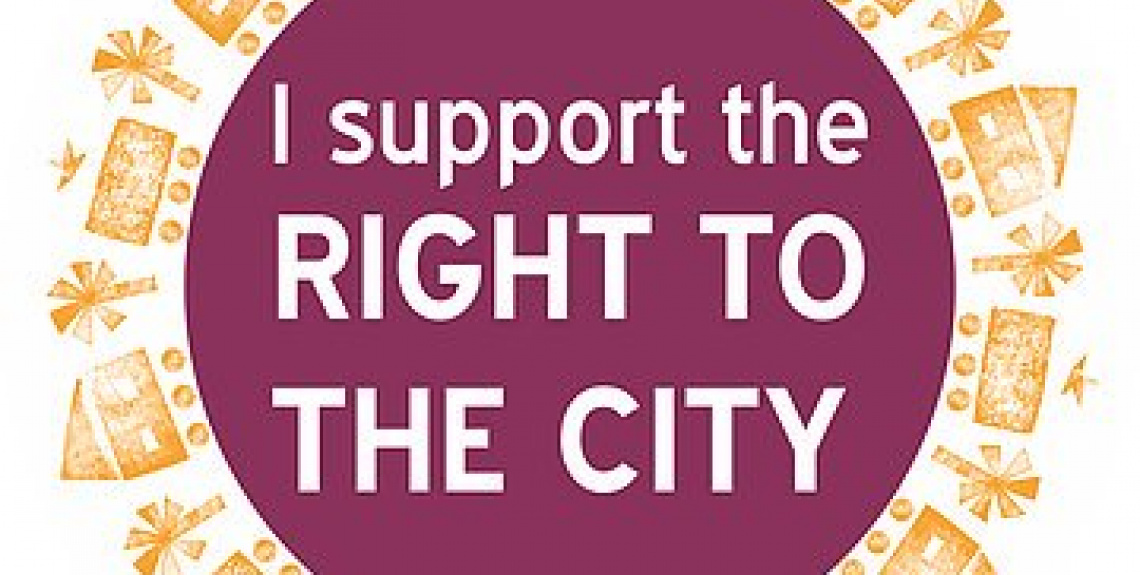 We, inhabitants, citizens and organizations undersigned, call on national governments and all stakeholders involved in Habitat III's preparation process to commit to the Right to the City as a fundamental concept of the New Urban Agenda.

The Right to the City is the outcome of decades of a collective and bottom-up creation that consists in the right of all inhabitants, present and future, temporary and permanent, to use, occupy, produce, govern and enjoy peaceful, just, inclusive and sustainable cities, villages and settlements, understood as a common good essential to a full and decent life.

We urge world leaders to commit to a solid definition of the Right to the City that comprises inclusive economies, policies grounded on human rights and environmental sustainability, enhanced political participation, inclusive citizenship free of discrimination, gender equality, cultural diversity and quality public spaces. Moreover, this commitment needs to encompass not only urban areas, but all human settlements, from large metropolitan areas, to cities, towns, villages and rural settlements.

Despite the commitments achieved at Habitat II in Istanbul, 1996, the situation of our cities has dramatically worsened during the last two decades due to misled policies that have promoted cities’ competitiveness and speculation rather than promoting their social function. The Habitat III will gather again all national governments to discuss a global agenda for urban development and human settlements for the next 20 years.

This represents a major opportunity for world leaders to take action towards making just, inclusive and sustainable cities by adequately acknowledging the Right to the City as a new paradigm in the New Urban Agenda.

The Right to the City converges with traditional notions of human rights because it calls for the recognition by authorities that spatial inequalities in our cities hinder the fulfillment of Human Rights, Sustainable Development Goals and the commitments of the Habitat Agenda. Therefore, the inclusion of the Right to the City, understood as a territorial and integral dimension of the Human Rights in the New Urban Agenda, will serve as a stepping-stone for citizens everywhere to fight for better human settlements for all. This is particularly important for population groups that are marginalized and in the most vulnerable situations, notably persons with disabilities, older persons, refugees, internally displaced persons, migrants, minorities, indigenous peoples, children, and people who are homeless. Furthermore, the Right to the City promotes a city of gender equality which adopts all necessary measures to combat discrimination in all its forms against women, men, and LGBT people in political, social, economic and cultural terms; a city which takes all appropriate measures to empower all women and girls and ensure the full development of women, to guarantee them equality in the exercise and fulfilment of fundamental human rights, and a life free of violence in private and public spaces.

We are convinced that global mobilization is the key to make the Right to the City a pillar of the vision of the New Urban Agenda and a roadmap for all necessary implementation, follow-up and monitoring mechanisms, including high level multi-stakeholder debates in the UN system and local authorities. World leaders must commit now to make our villages, towns and cities more inclusive, equitable, democratic, safe and sustainable for all.

Human Rights and Right to the City for All!

Global Platform for the Right to the City

Sign the petition for world leaders to commit to the inclusion of our Right to the City in the New Urban Agenda!