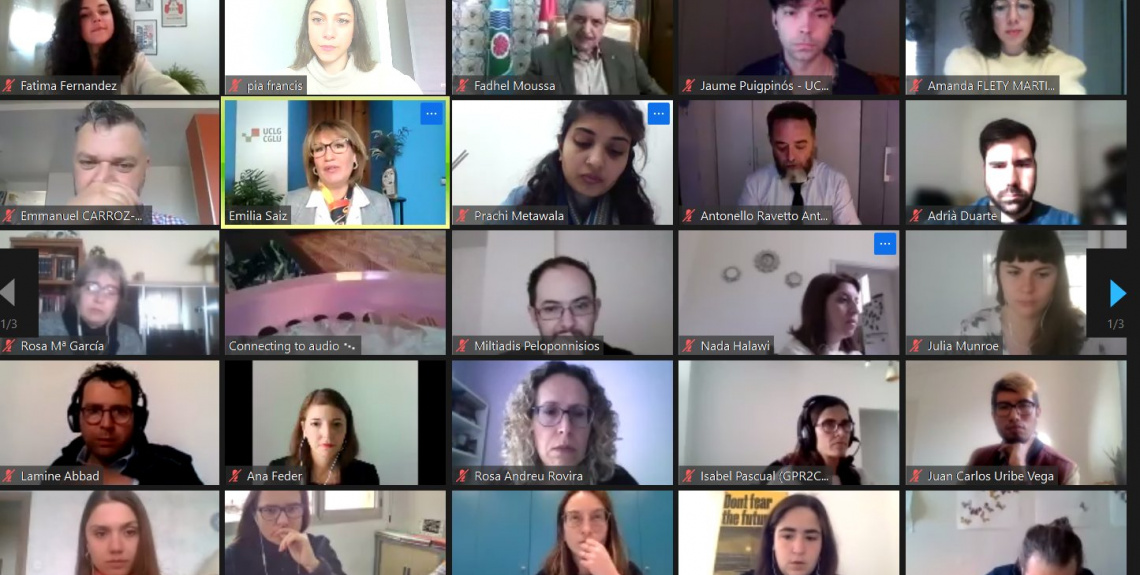 Exploring the vision and potential behind the notion of “Local Inclusive Citizenship”: MC2CM Peer Learning event co-organized by our Committee

The MC2CM Peer Learning event “Local Inclusive Citizenship: Fostering the Right to the City for All” held last 16-18 March in a digital format by the city of Grenoble addressed the concept of “local inclusive citizenship” in connection to the social inclusion of migrant residents. The event provided a meaningful platform for Committee members to showcase the existing wealth of approaches and practices on this topic - developed throughout two decades of global municipalism for human rights and the right to the city - altogether with MC2CM members and other key partners in the Euromediterranean region. Its outcomes will nourish the UCLG conversation on how to renew the “local social contract” and adopt a “Pact for the People” in the COVID-19 aftermath.

Held throughout three days of intense exchanges and sharing of ideas, the event gathered an unprecedented level of political attention for a key concept in current human rights cities and right to the city discussions: that of local inclusive citizenship. This frontier concept - referred to in other concepts as “Urban Citizenship” - represents a key innovation and contribution by local stakeholders to global human rights practice, as it has allowed to reclaim and establish effective policy pathways to guarantee human rights’ universality while reinventing social inclusion through ingenious recognition and unconditional caring policies.

In order to trigger peer-to-peer learning among participants, the event was mostly structured around three thematic sessions that combined the use of interactive learning methodologies (such as role playing and urban storytelling) with the presentation of practices. These sessions covered three different topics that were understood, when seen in perspective, as policy pathways to build local inclusive citizenship: i) local mechanisms on human rights protection and non-discrimination; ii) local innovations to overcome administrative barriers and foster cooperation; iii) establishing local institutions to foster migrants’ political participation and recognition.

Members and active local governments within the Committee took an active role in the event either by presenting their own policies on the subjects described above, or by actively participating in the conversations and thematic workshops organized. The host city of Grenoble took for instance an active role throughout the whole event and shared relevant initiatives in the field of awareness raising, participatory democracy and civil society engagement. Valencia and Barcelona presented very innovative practices in the field of human rights guarantee - the former referring to a local plan to foster conviviality and non-discrimination; the later having implemented various mechanisms that favour naturalization processes and intend to protect migrant residents from being suddenly deported due to irregular status.

Represented by Mayor Fadhel Moussa, the Tunisian city of L’Ariana shared a compelling political vision that mainstreams values of inclusiveness and universality in policymaking. Sousse, also in Tunisia, presented a more specific example of policy-making, which stresses the role of participatory democracy in fostering civic inclusion and addressing stereotypes. The Seine Saint Denis Departmental Council also addressed the notion of citizenship through more “soft terms”, highlighting for instance the role of decentralized cooperation and intercultural dialogue practices to reinvent our understanding of conviviality, development and identity.

Other UCLG-CSIPDHR local authorities joined these discussions and presented their own views on these subjects, including the cities of Granollers, Grigny, Gwangju and Utrecht. Other participating partner organizations included the Fons Català de Cooperació, the Union of Young Elected Local Governments of Greece, CODAS Caritas Douala, INFID Indonesia and the Global Platform for the Right to the City.