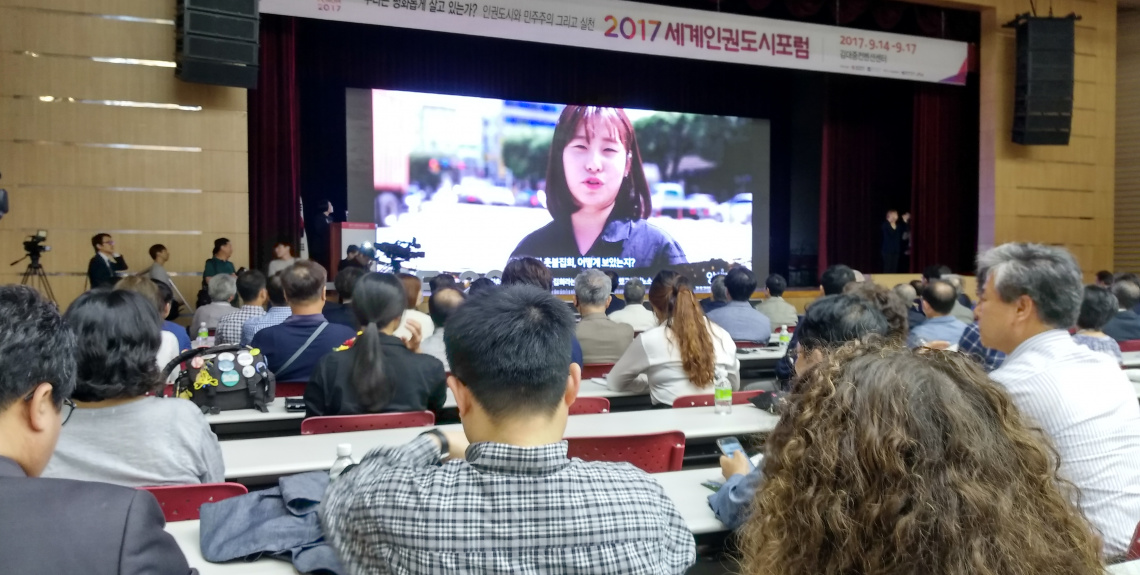 The Cities for Rights Movement is on the rise

A successful 7th edition of Gwangju World Human Rights Cities Forum and a rising interest by the UN Human Rights Council show that the Human Rights-Cities Movement is gaining ground.

Over the last month, two important events – a local governments delegation to the UN Human Rights Council and the 7th edition of the Gwangju World Human Rights Cities Forum-  gathered local governments and citizens from all over the world with the same goal: to bring human rights at the heart of local and global agendas. Indeed, being at the forefront of people’s everyday lives, local governments play a key role in promoting, protecting and fulfilling universal human rights such as the right to water, food, housing, safety, or to a life free of discrimination. Since 2005 the UCLG Committee on Social Inclusion, Participatory Democracy and Human Rights has provided a coordination framework to the Human Rights-Cities Movement, towards the progressive realization of the Right to the City.

On 4 September, the Committee organized a local governments delegation to the UN Human Rights Council led by Mauricio Valiente, Madrid’s Deputy Mayor on Human Rights and Historical Memory and David Payot, Lausanne’s Councillor on neighbourhoods, children and youth, on the occasion of the high level panel on “Local government and human rights”.

A UCLG statement was first presented to the Council by Mauricio Valiente, welcoming the recognition of the role of local governments in promoting and protecting human rights and recalling the key conditions to sustain this work: full decentralization with sufficient competences and means, and the securing of local democracy and autonomy.

A side event was co-organized by the Committee shortly afterwards (minutes available here) in collaboration with INFID, ADN21 and the participation of the Raoul Wallenberg Foundation and the Korean Foundation for Human Rights, which aimed to bring the voice and experiences of local governments to UN Guiding Principles on Local government and human rights to be drafted by the Council’s Advisory Committee.

While in Geneva, Committee delegates were also received by Kate Gilmore, UN Deputy High Commissioner for Human Rights, in order to renew the shared commitment of UCLG and this office (OHCHR) to drive forward the human rights agenda together. Particular emphasis was paid to the right to housing and the “Make the Shift” campaign, launched by the UN Special Rapporteur on adequate housing together with UCLG and UN OHCHR. 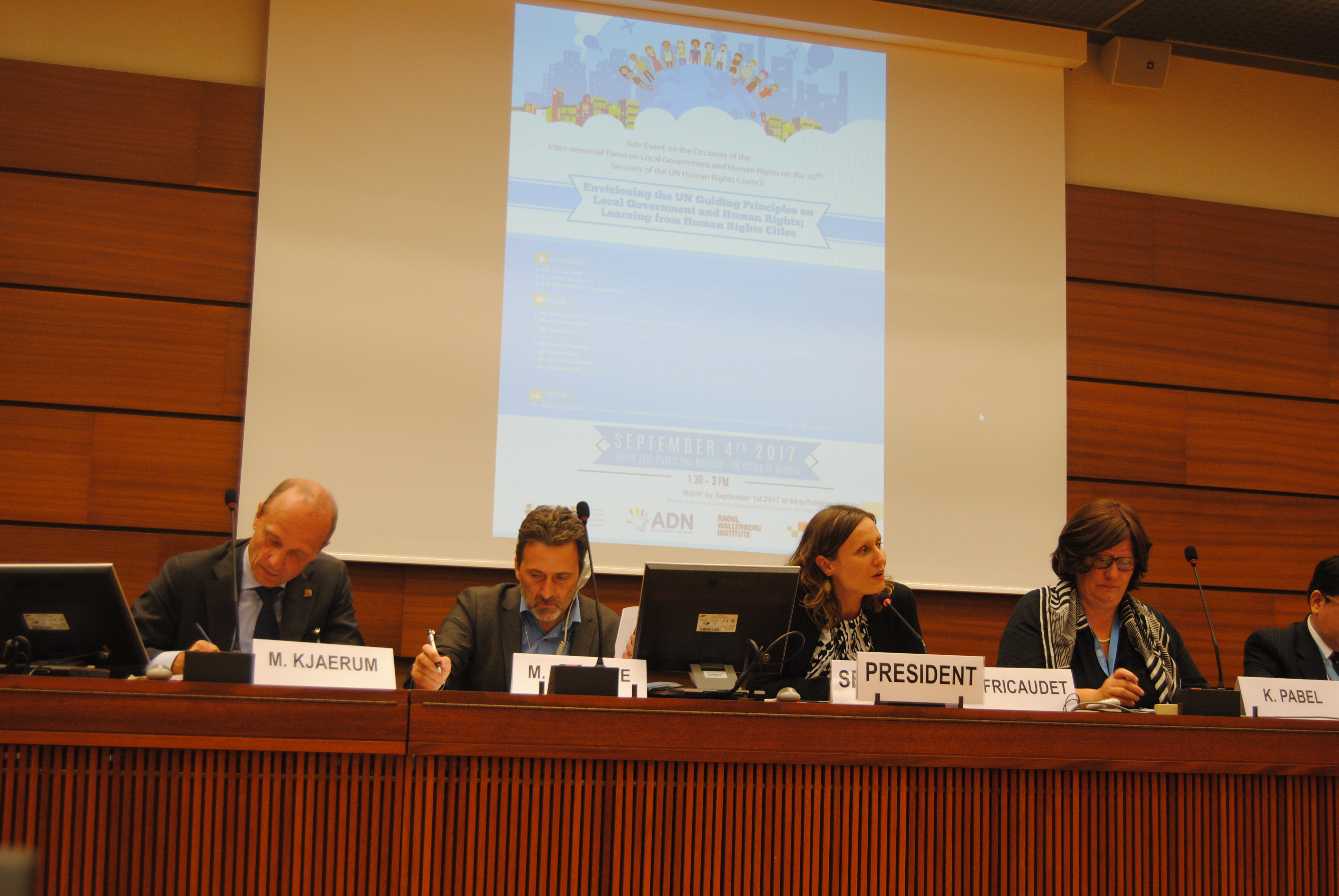 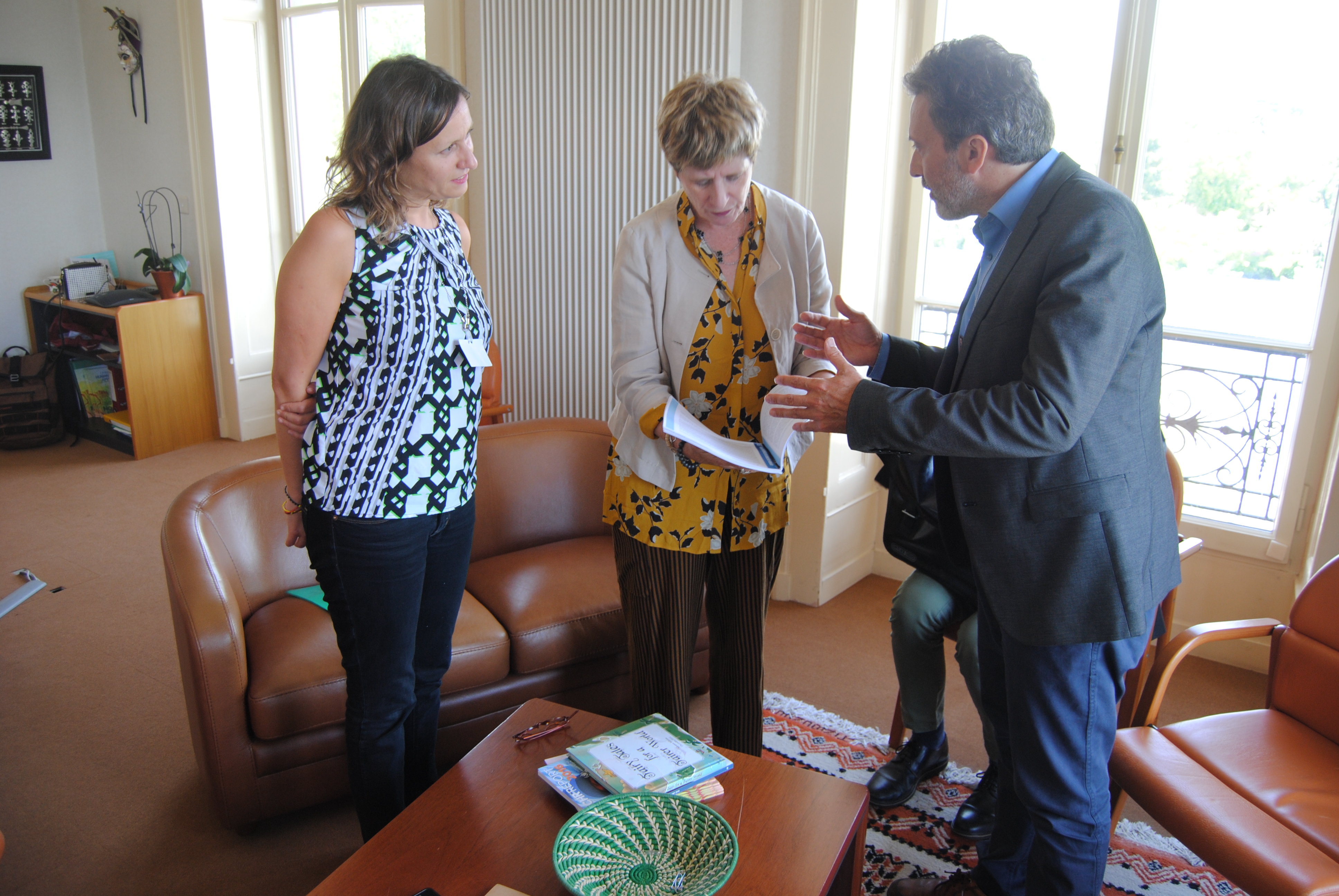 The Human Rights-Cities Movement also gained ground during the celebration of the 7th World Human Rights Cities Forum, hosted by the Gwangju Metropolitan Government and the Gwangju International Centre (14-17 September). Held under the theme of peace and participation, and in the light of Korea’s Candlelight Democratic Movement that recently ousted President Park Geun Hye, this Forum’s edition gathered more than 700 participants.

Exchanges of experiences and learning took place throughout nine thematic sessions, focused on crucial aspects such as migration and human rights, social economy, gender equality, the human rights of the young and the elderly, as well as plenary and special sessions dealing with direct democracy mechanisms and regional cooperation for peace.

Forum participants ranged from Bethlehem, Mexico City, Madrid, Grenoble, Lund, Seoul and Busan, to the Indonesian network of human rights cities, and the Global Platform for the Right to the City partner organizations such as Kota Kita Foundation, Observatori DESC and the US Human Rights Cities Alliance.

An expert meeting organized by the Committee, INFID and the Korean Foundation for Human Rights assessed the key elements of establishing UN Guiding Principles for Local government and human rights.

Despite the global context of the “pushback against human rights” (as denounced by Amnesty International), the WHRCF was a meaningful place of articulation for the global community of local governments, civil society organizations and citizens defending human rights and working for a peaceful and democratic world.

In the final statement of the Forum (available here), participants reaffirmed their commitment to “the principles of universality and indivisibility of human rights”, “to work for a more peaceful, inclusive and safer society through conflict transformation and peace-making via people-to-people and bottom-up solidarity actions” and to promote “a global network of human right cities (…) in partnership with international associations of local governments and cities such as the UCLG Committee on Social Inclusion, Participatory Democracy and Human Rights”.

The Forum’s final declaration equally calls to put human rights back at the heart of the world order, denouncing violations of international law in Palestine or regarding the current situation of the Rohingya people. 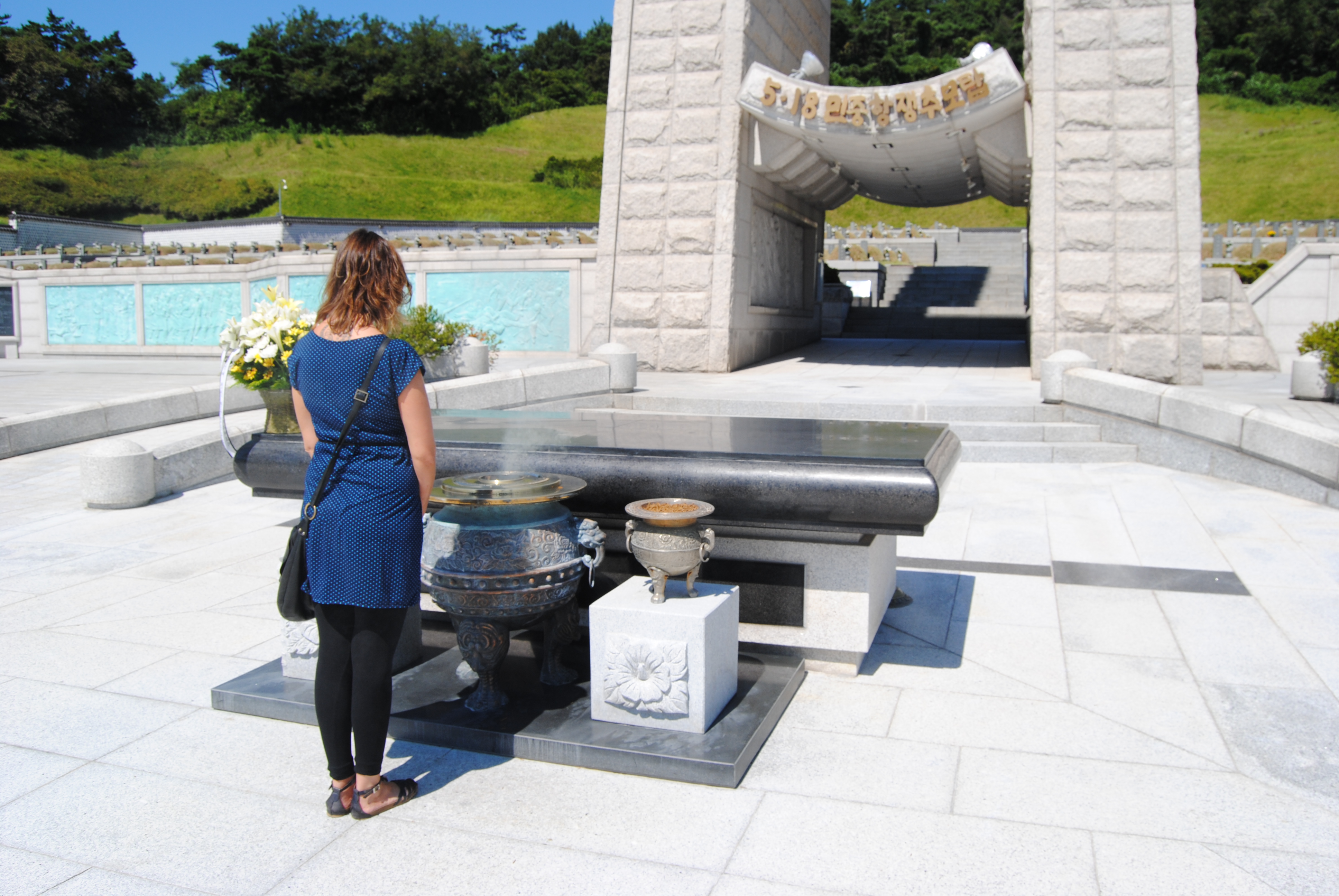 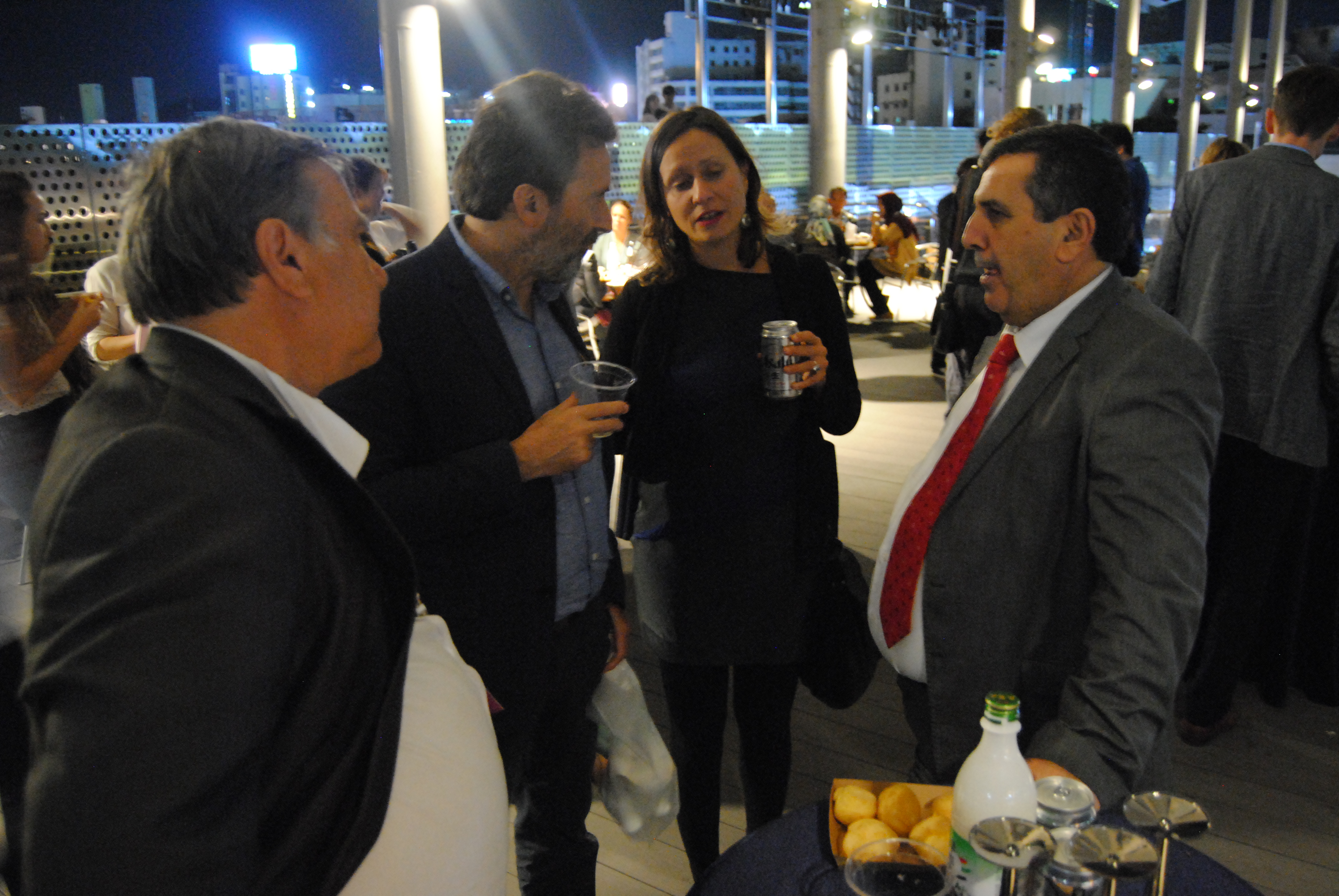 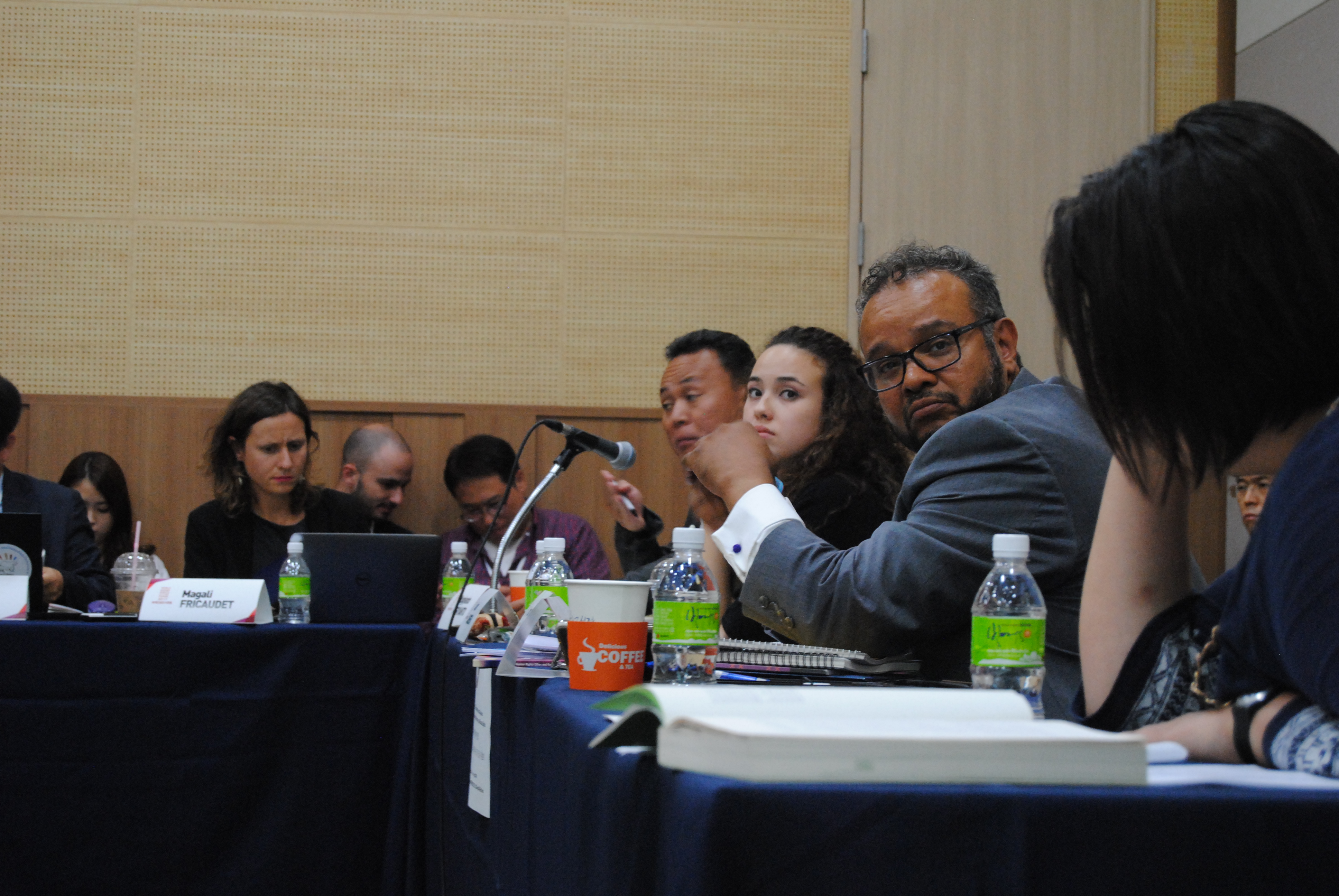