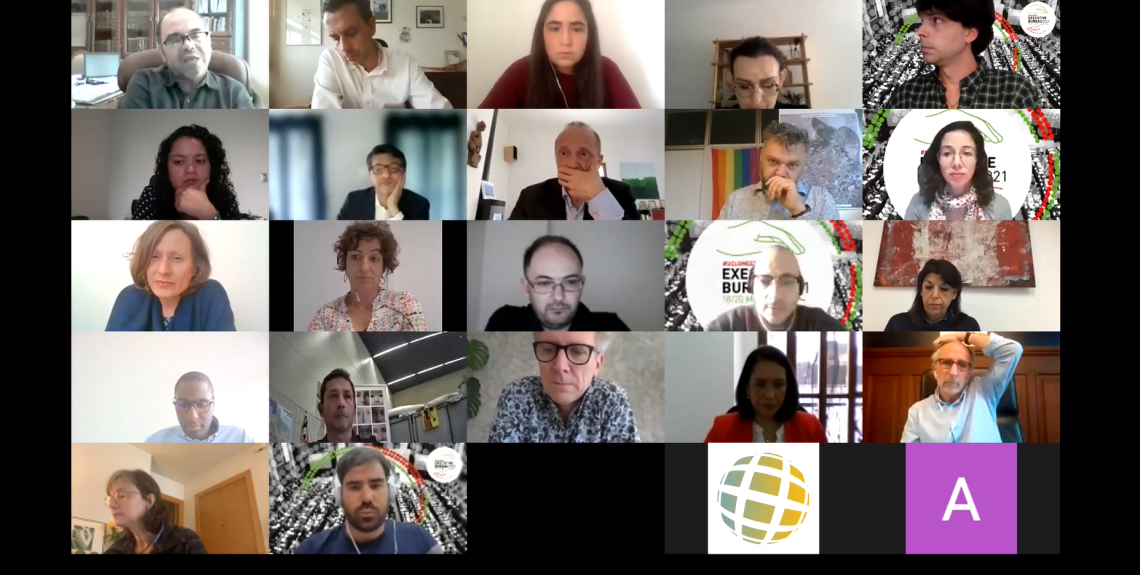 Annual Meeting of the Committee held during #UCLGMeets: Co-creating a global roadmap on human rights for the 2021/22 period

The 2021 Annual Meeting gathered the co-presidency, members and active local governments to address emerging priorities and networking proposals in the agenda. Participants discussed the collective human rights roadmap of the Committee, including the follow-up process to the Global Charter-Agenda for Human Rights in the City (to take place from 2021 to 2022), strengthened human rights campaigning, the renewed online learning strategy by the Committee and strengthened partnership with the OHCHR.

Networking proposals by the co-presidency

In his opening remarks, Grigny’s Mayor Philippe Rio argued in favour of the increasing role of human rights in the Committee’s strategy, noting how “local governments are places of resistance and resilience where human rights are defended and conquered everyday”.

The representative of Utrecht, Hans Sakkers, introduced the 10 > 100 > 1000 campaign concept, based on harnessing cooperation among local governments and key stakeholders to expand the numbers and levels of policy developments within the human rights cities movement, advancing towards a more professionalized and sustainable movement.

The representative of Seine Saint Denis, Magali Fricaudet, shared how her department will be launching, on the basis of its own local experience, an international cooperation project bringing together local and regional governments’ initiatives to fight violence against women to learn from each other and push for a common agenda and framework of action.

The representatives of Mexico City, Mariana Flores, informed participants on the latest updates of the Territories for Peace Forum held by her city not only as a concrete space for encounter but also a long-term process of dialogue and reflection among a wide coalition of stakeholders around the notion of peace culture and urban safety.

The representative of Plaine Commune, Habib Gniengue, shared how his local government is renewing its international strategy, based on pursuing its previous engagement with the right to the city agenda while better addressing local priorities such as the urban transformation of this urban area due to the 2024 Summer Olympics.

Representing the Gwangju co-presidency (absent to the event due to the commemoration of the 18 May Gwangju Uprising), Amanda Fléty informed participants on the latest updates of the Myanmar initiative. Along with the Raoul Wallenberg Institute Director, Morten Kjaerum, they presented the 2021 edition of the World Human Rights Cities Forum, to take place from 7 to 10 October focusing on the issues of inequalities and resilience to crisis.

The coordinator of the UCLG-CSIPDHR Secretariat, Amanda Fléty, gave an overview of the  2021-22 roadmap on human rights. The roadmap is composed by different axis of action, closely intertwined and taking place simultaneously in the coming period with a view to support its members, strengthen the Committee’s contribution to the human rights cities movement and consolidate the role of human rights in the UCLG agenda of priorities.

The update process of the Charter-Agenda for Human Rights in the City (more information here) will focus on developing a renewed collective, global vision by local governments on human rights, exploring innovation trends and fostering dialogue between initiatives.

Campaigning proposals on local governments and human rights will build on members’ initiatives seeking to support the human rights cities movement, while promoting human rights concepts within UCLG’s new Pact for the Future and post-COVID-19 recovery.

The Committee will also co-create new learning methodologies on local governments and human rights with the UCLG Learning department, including a MOOC course and a knowledge hub. These tools will build on members and key partners’ expertise (which will also be involved in the development of these online learning methodologies).

Representing the OHCHR, Bahram Ghazi shared the latest updates on the forthcoming cooperation framework between his Office and UCLG. He also identified potential ways forward for bringing this agreement forward through a joint work plan (including learning, capacity building and political debate activities).

The summary of discussions of the 2021 Annual Meeting is available here. Do not hesitate reaching our Executive Secretariat should you be interested in any of the initiatives discussed during the meeting.