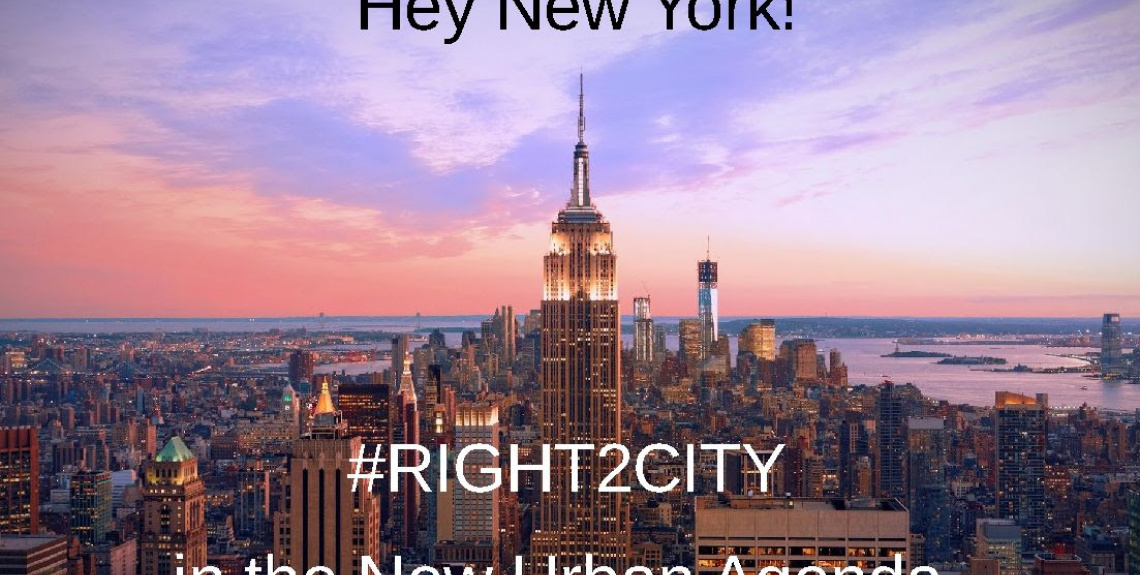 Habitat for people, not for profit! – Open letter against financialization of cities and for Human Rights in the New Habitat Agenda

In views of the Habitat III informal hearings hold in New York last 6-7 June, Habitat International Coalition (HIC), the International Alliance of Inhabitants (IAI) and the Habitat Network (Habitat Netz) addressed an open letter to the different Habitat III parties, recalling the need for a substantial paradigm shift in the way we build our cities. To this end, the letter’s authors call for putting the right to housing and all Human Rights at the heart of the New Habitat Agenda, through promoting policies able to limit cities’ financialization.

This declaration is based on the identification of the main lacks of the New Habitat Agenda zero draft –mainly related to the right to housing.

After recalling that the New Agenda needs to be an Habitat Agenda, not only urban, by putting the right to housing at the centre of its concerns, the letter’s writers state that the draft lacks of any systemic debate on the growing role of transnational corporation, private equity funds and securitization and other real estate markets in housing, among others, regarding urban development. It neither includes any reference to the needed tools for a social regulation of private real estate –and, specifically, to the rent control as a mean for ensuring security of tenure and the right to housing. Also, in terms of tax system, it would be needed a more developed strategy towards an effective and fair taxation of property transactions and rental income, in order to reduce speculation and gentrification and, at the same time, redistribute resources into social housing needs.

The open letter also highlights the fact that the zero draft does not address the centrality of previous Habitat Agendas’ commitments to Human Rights and of the corresponding obligations of the States –and this is particularly true regarding the right to housing, which is rooted in international instruments for Human Rights compliance. In parallel, it is also highlighted the fact that none of the Habitat III Agenda recommendations will success as long as the current distortions in the macroeconomic system and the austerity policies prevail: building cities for people is only possible with a clear commitment in public spending and popular participation.

Towards a substantial paradigm shift

The letter acknowledges the important progresses included in the zero draft, such as a strong tax system based on tools to capture the wealth created by the city, the recognition of the right to water, the need for creating substantive housing policies and the commitment for a sound system of land’s governance. However, all this must result in a real “radical” paradigm shift in urban development that the current text –although acknowledging it- does not concrete, and have to face the dominant macroeconomic order and the impunity for violent conflicts, occupations and wars, as well as inequalities. To this end, the authors propose three main transformative principles to ensure this paradigm shift:

You can read the whole open letter though the link below. It is also possible to access to the Mexico Declaration on Local Finances and the Right to the City, adopted on March 2016, which includes recommendations for the New Habitat Agenda to promote a reinforced local tax system to fight against financialization of cities.